Another trip down memory lane to a time when days were long, and the sun always shone; although I seem to remember a lot of thunderstorms…

Castle class 5017 ‘The Gloucestershire Regiment 28th 61st’ takes the up Torbay Express along the sea wall at Dawlish on 16th May 1958.

7010 ‘Avondale Castle’ is only 11 years old as it waits for signals to proceed from Newbury Racecourse station in August 1959. Sadly, in a little over 4 years time it will be razor blades. 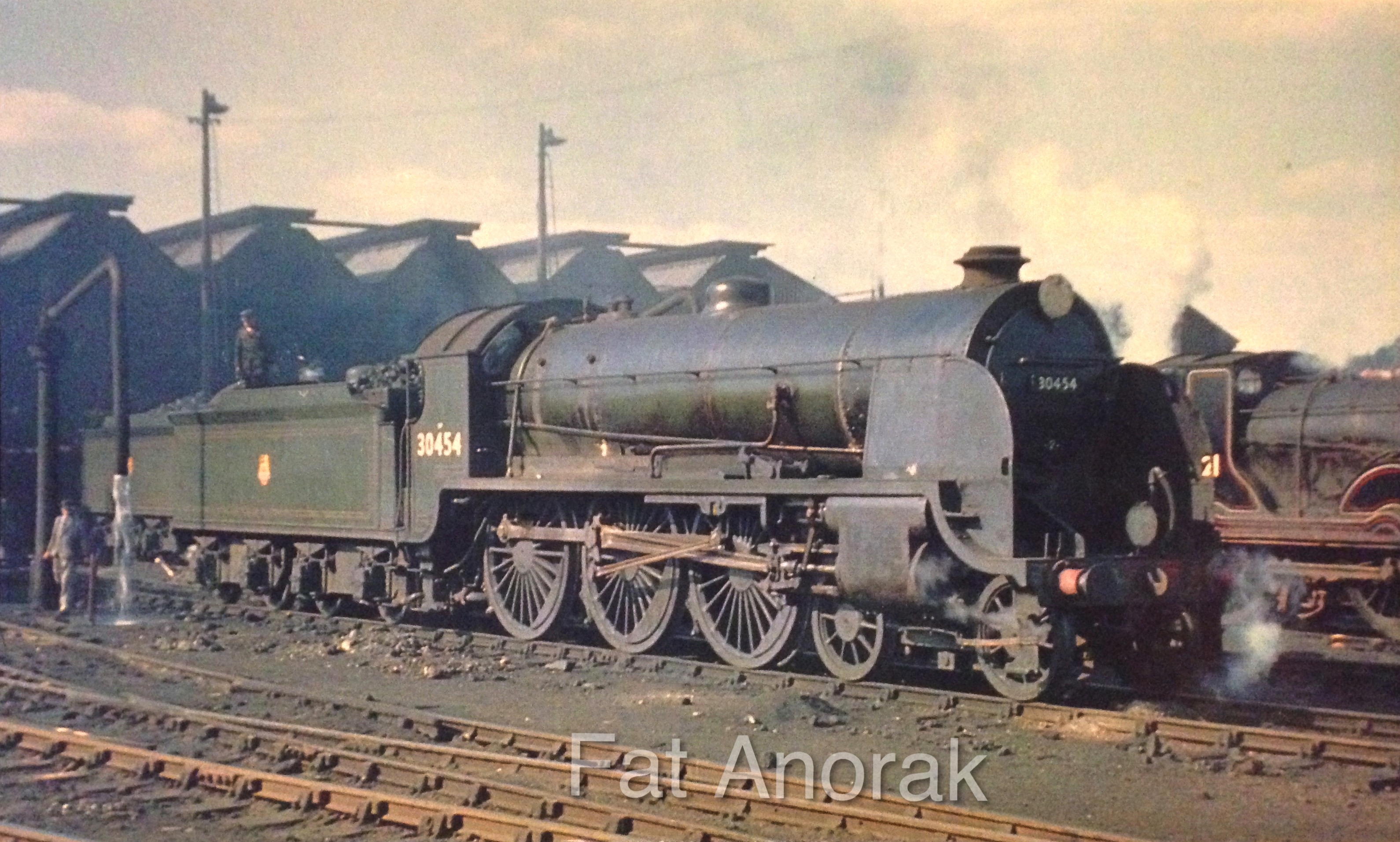 King Arthur class 30454 ‘Queen Guinevere’ has only 12 months of life left as she is prepared for her next duty at her home shed of Salisbury in October 1957. 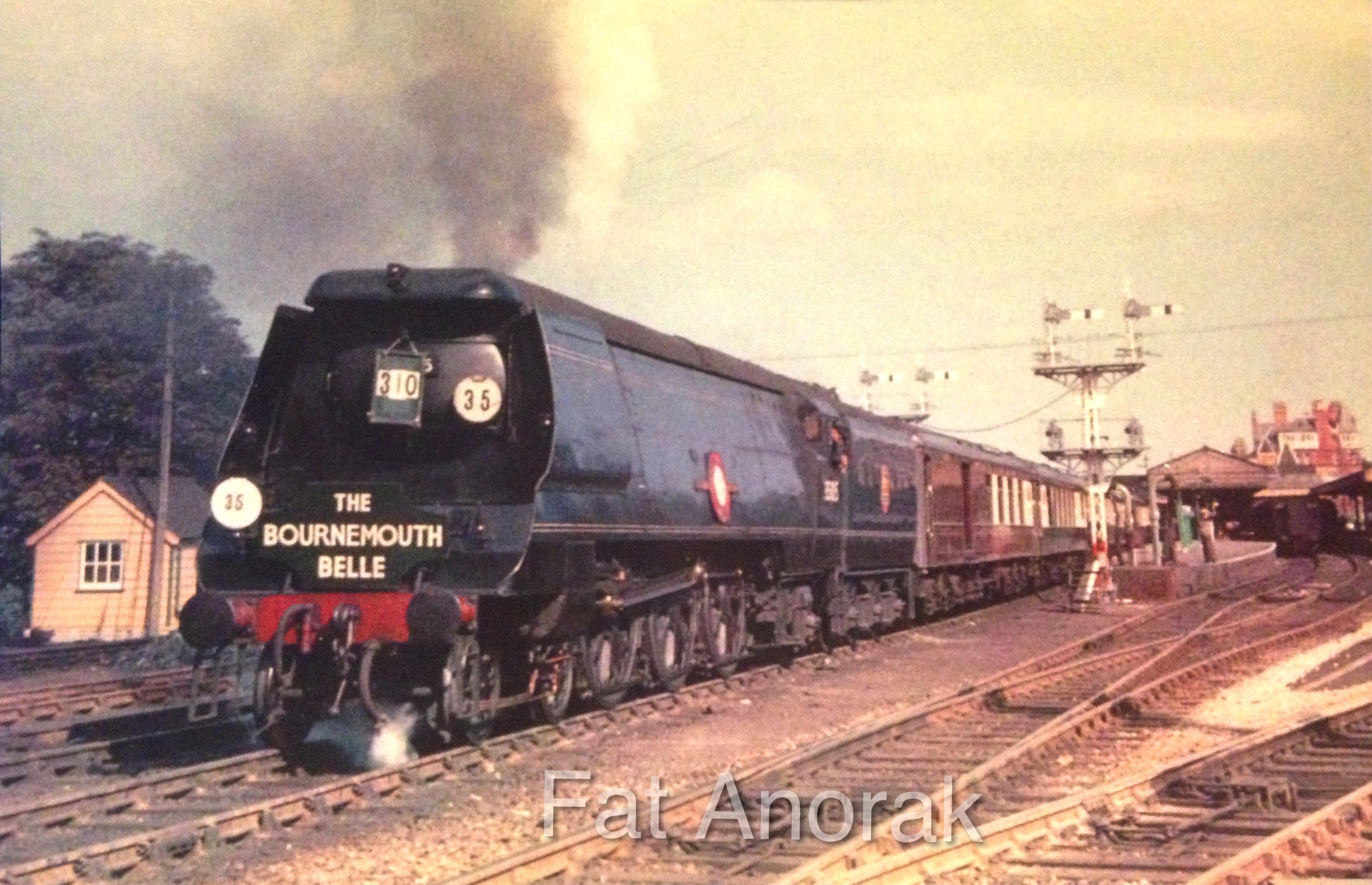 Merchant Navy class 35015 ‘Rotterdam Lloyd’ appears to be in a blue livery (or maybe just poor colour film) as it awaits departure from Bournemouth West with the up Belle in July 1951. Oh! to be on that train, drifting up to London enjoying a leisurely lunch with a decent bottle of Chablis.

A somewhat more down to earth service now, as 42254 passes Benfleet with a commuter’s passenger train. 15th June 1958.

Patriot class 4-6-0 45519 ‘Lady Godiva’ takes the through road at Longsight station in June 1957. The signal gantry is worthy of a photo on its own. 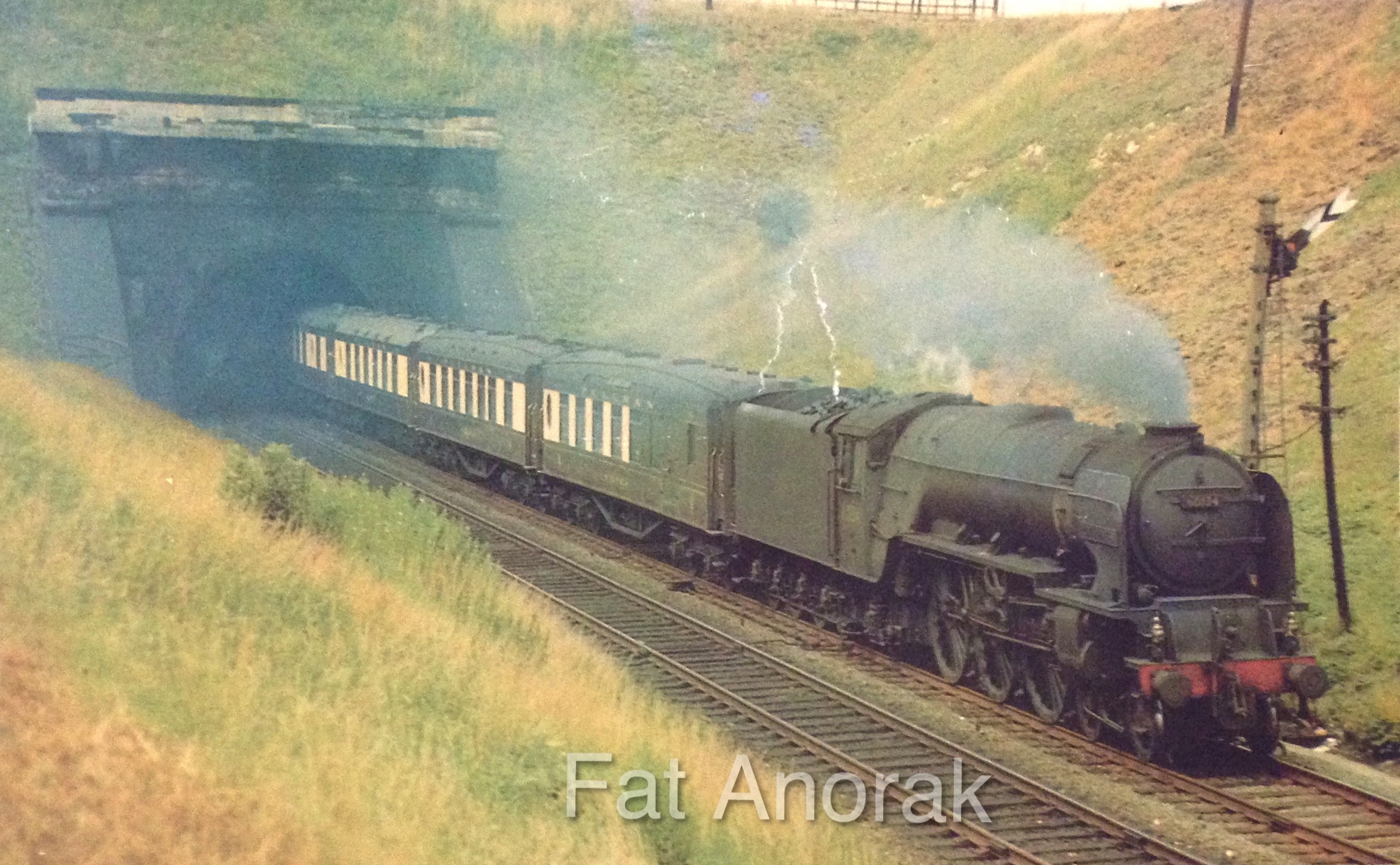 A1 pacific 60134 ‘Foxhunter’ emerges from Stoke Tunnel south of Grantham, on 18th July 1959 with a uid Pullman train, but probably the Yorkshire Pullman given 60134 was a Copley Hill loco at the time. With such a prestigious train, it would have been nice if the Leeds cleaners had made an effort on the locomotive. 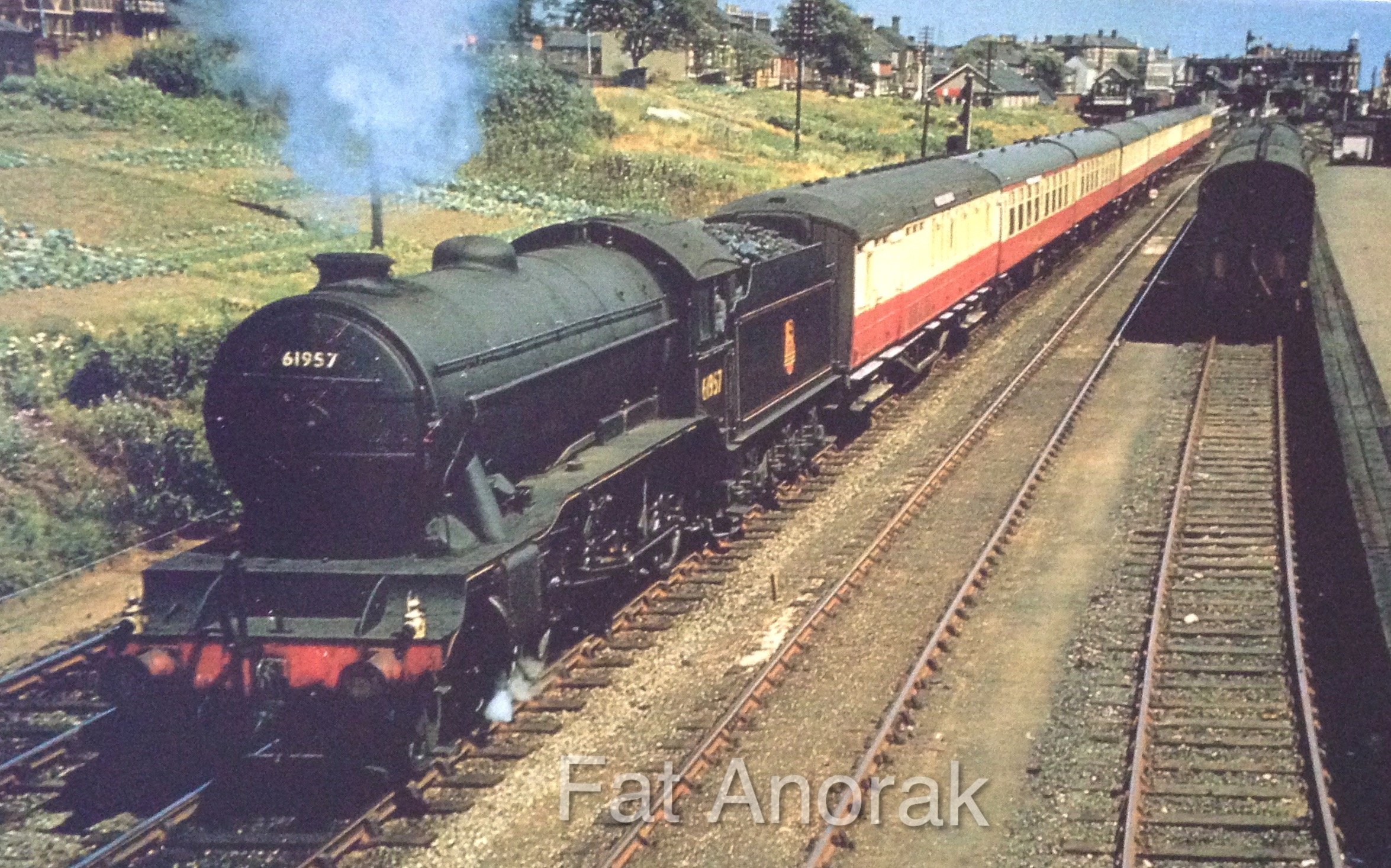 In much cleaner condition is K3 61957 at the head of a departing passenger service from Lowestoft in July 1957. 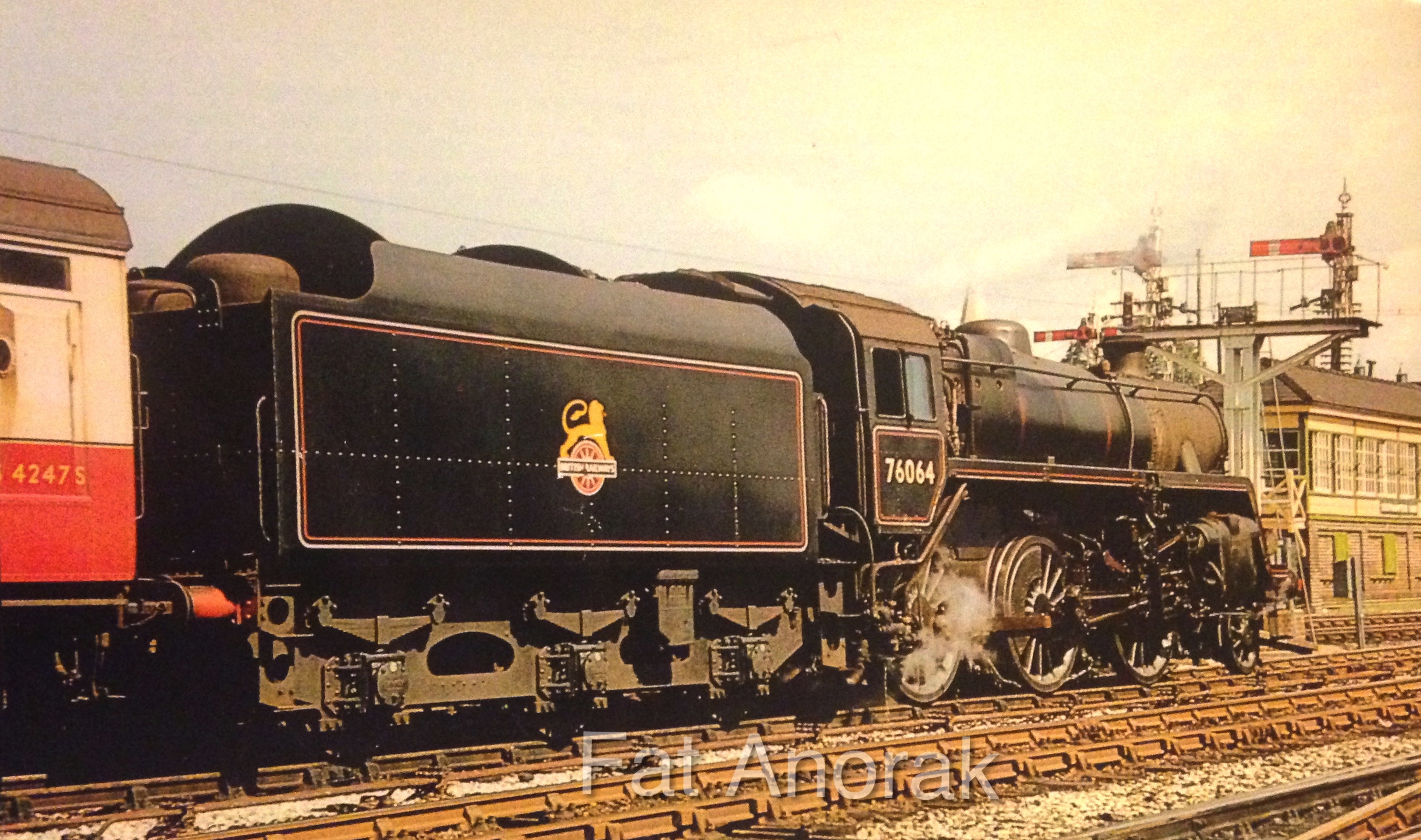 Standard class 4 2-6-0 76064 waits for its departure time from Southampton Central on 26th June 1957. This loco spent its entire 11 years working from Eastleigh shed.