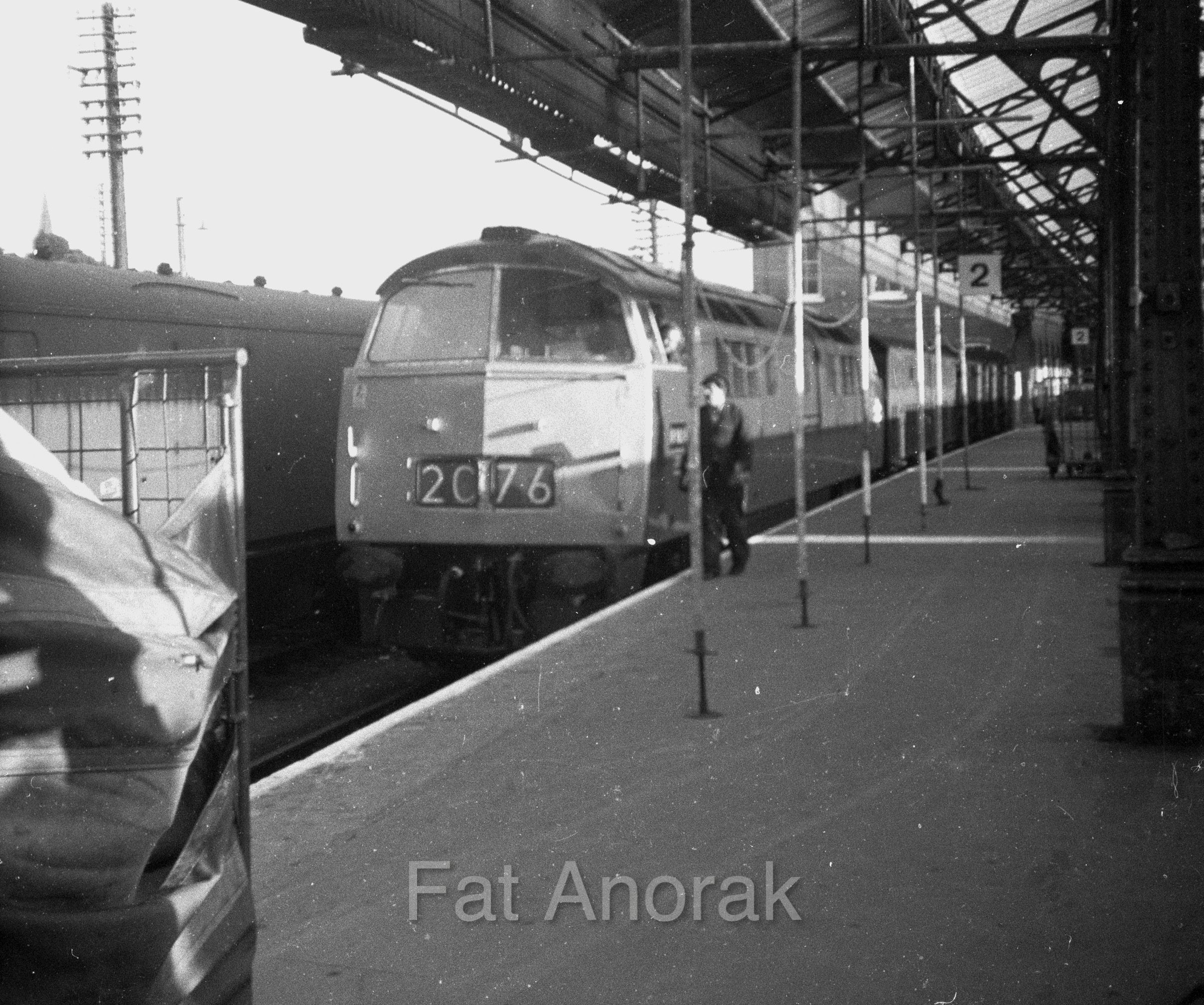 My trip to Bristol had been a great success, not least for the 20 Hymeks that I had seen during the day. My thoughts turned to trying it again before my weekly ticket ran out. Fridays and Saturdays were out because most trains needed compulsory seat reservation tickets, and on other days many required seat regulation tickets; but this rule only seemed to apply to journeys east of Exeter, so I was ok – not that I saw much of the ticket man anyway.

Friday was back to the Exeter routine, and produced – 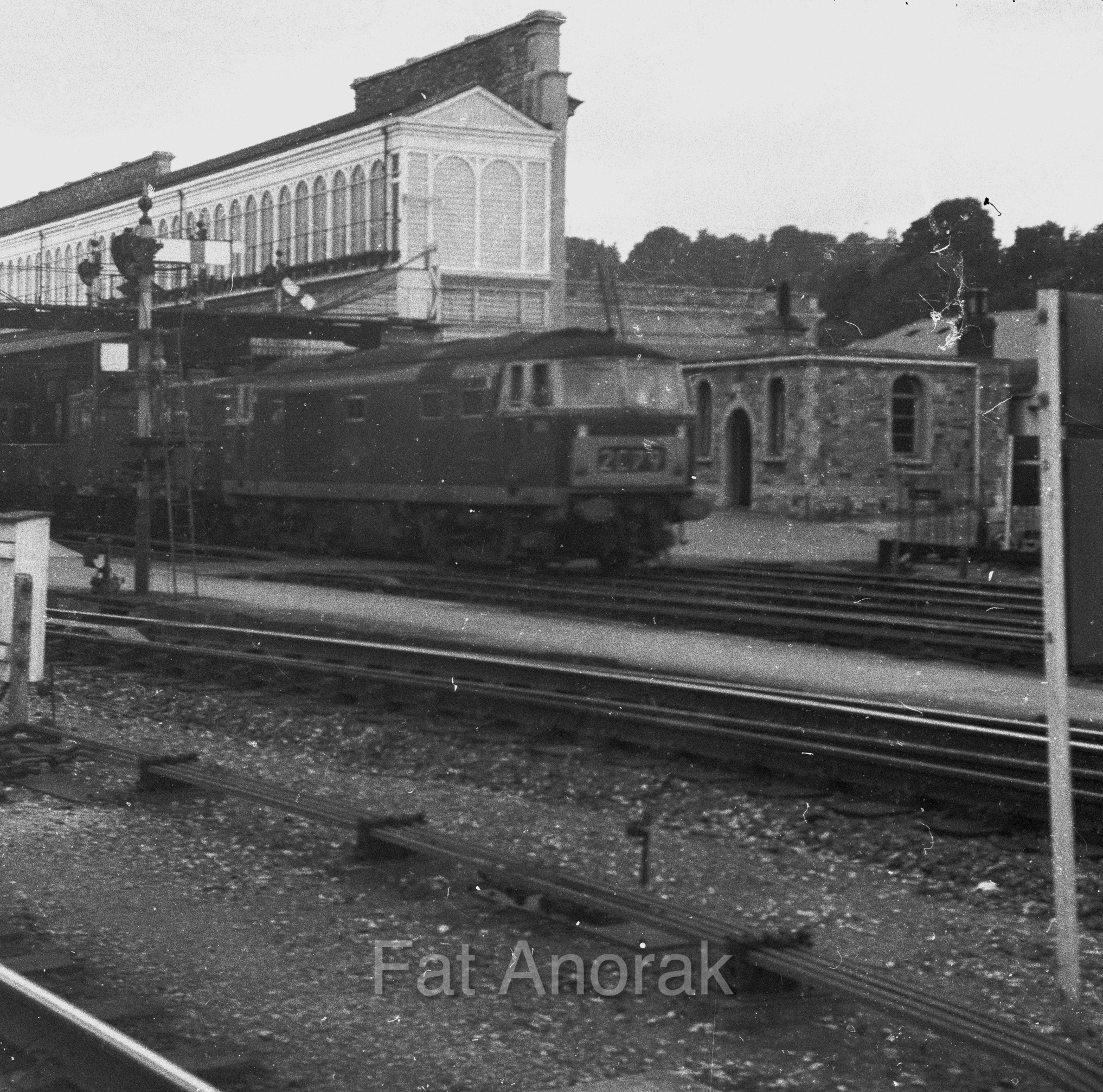 The Hymek was on a goods train, which proceeded up the hill to Central station, banked by a Warship (seen below). 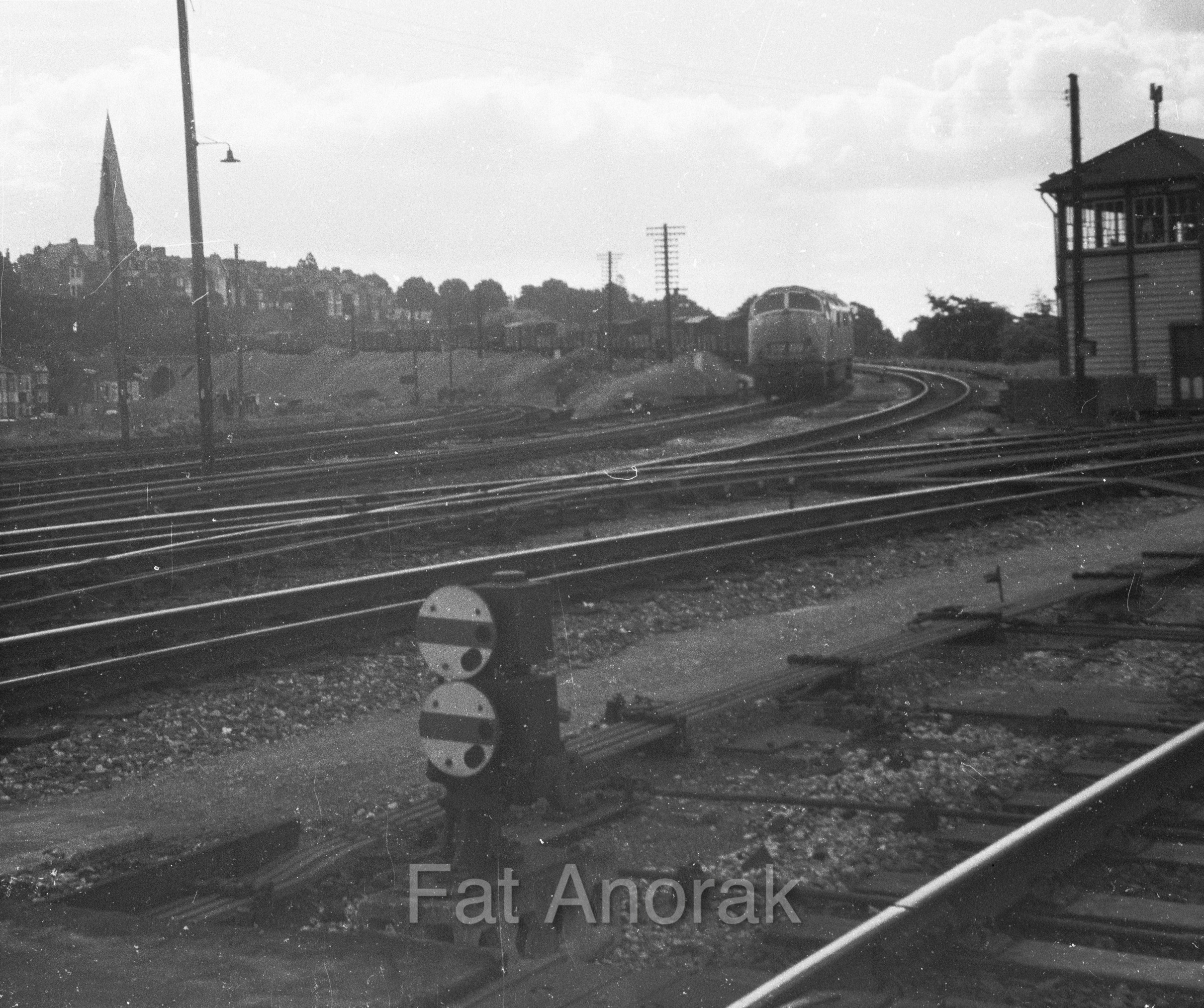 In addition to the delights of seeing hydraulics on trains every few minutes, I discovered another delight in the buffet – the meat pie. I have no idea of the make of the pies they sold, but they were not the usual ‘all pastry, dried up filling’ affairs found closer to home. These were some of the best pies I have ever eaten; so much so that I developed an addiction, and on at least one day (whisper it quietly) I succombed to more than one.

Saturdays on the routes to the Southwest could be described as marginally short of chaos. And 23rd August was no exception. I caught a Paignton to Sheffield (I think) train that  morning which spent about 20 minutes waiting at Newton Abbot for reasons unknown. The station seemed full of trains all waiting to leave. Eventually we did get away, but I never did find out the reasons for the delay. 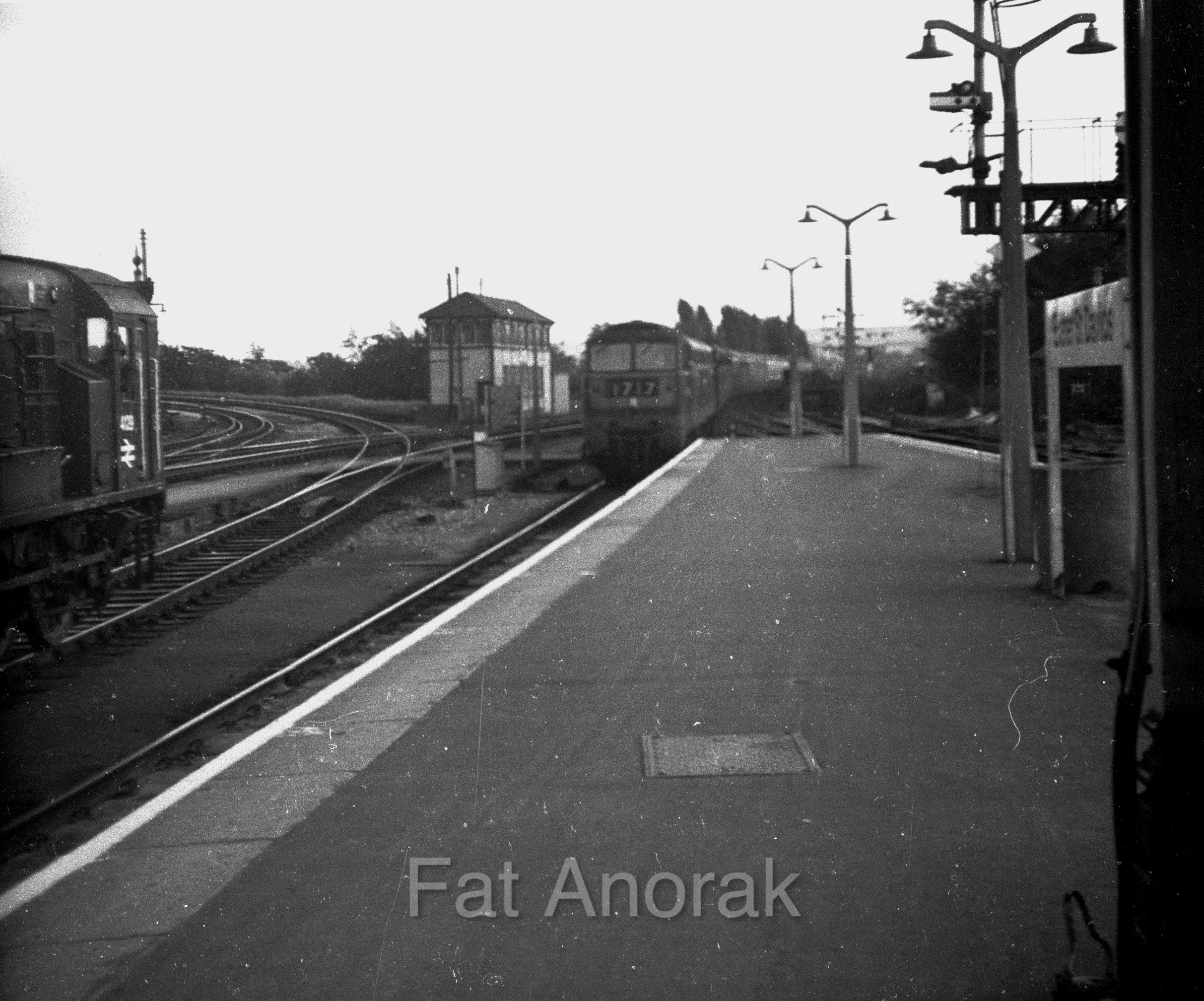 A day off on Sunday, as I thought the reduced service was not enough of a lure for me to bother. I had been advised to go to Newton Abbot and change for Plymouth where I could see D800/1/2 stored at Laira, but my ticket was not valid west of Totnes; so I chickened out on that one.

Monday saw me back to the Exeter routine, but one point was becoming more apparent – I had now seen most of the locomotives passing by and was beginning to think of other destinations. At one point I left the station and walked a few hundred yards to a point where the line to central crossed over the road – from which point I took this photo. (Apologies for the white scratches). 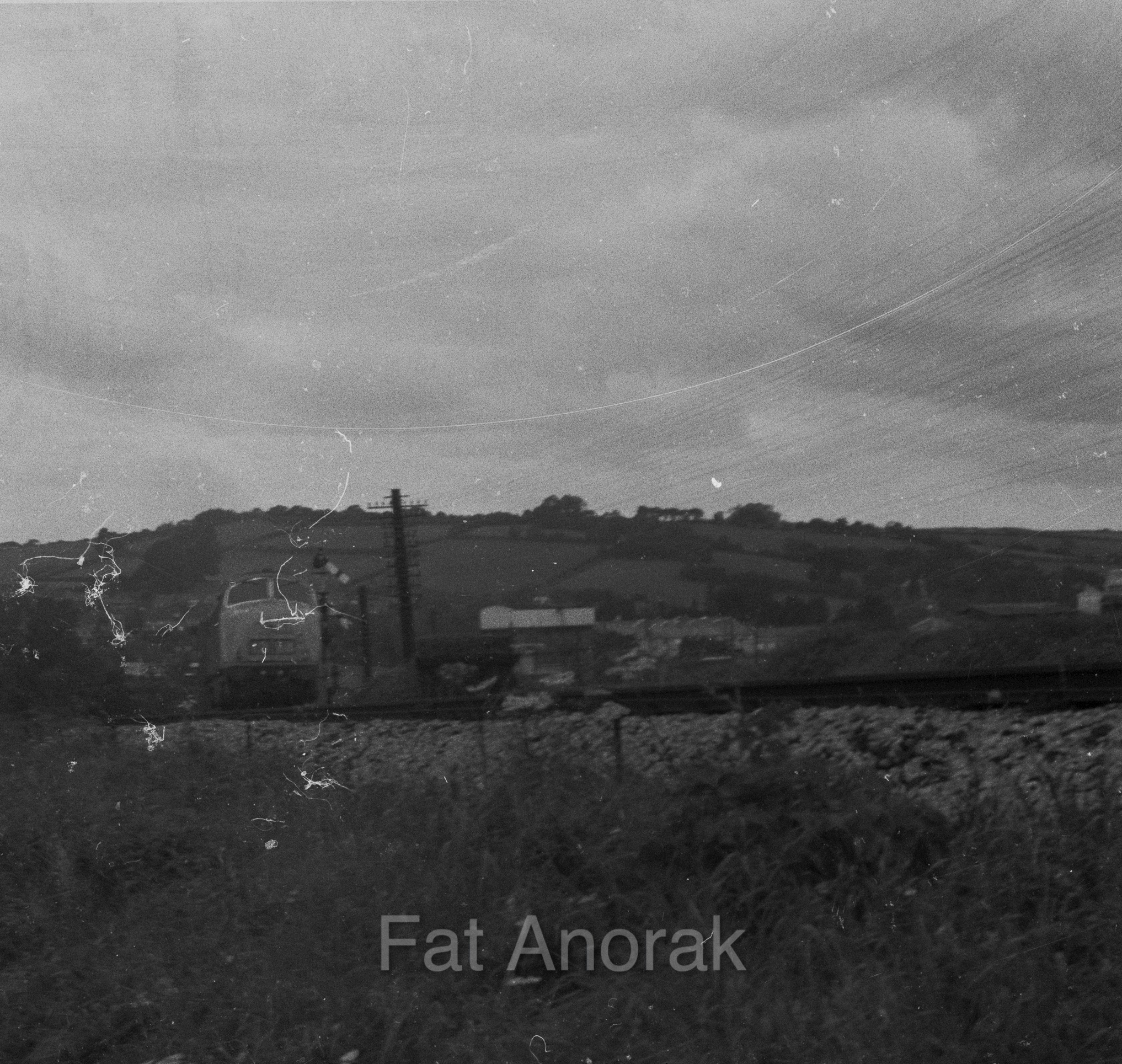 I just wanted to hear a Warship pass on full power uphill, and it was worth the effort. 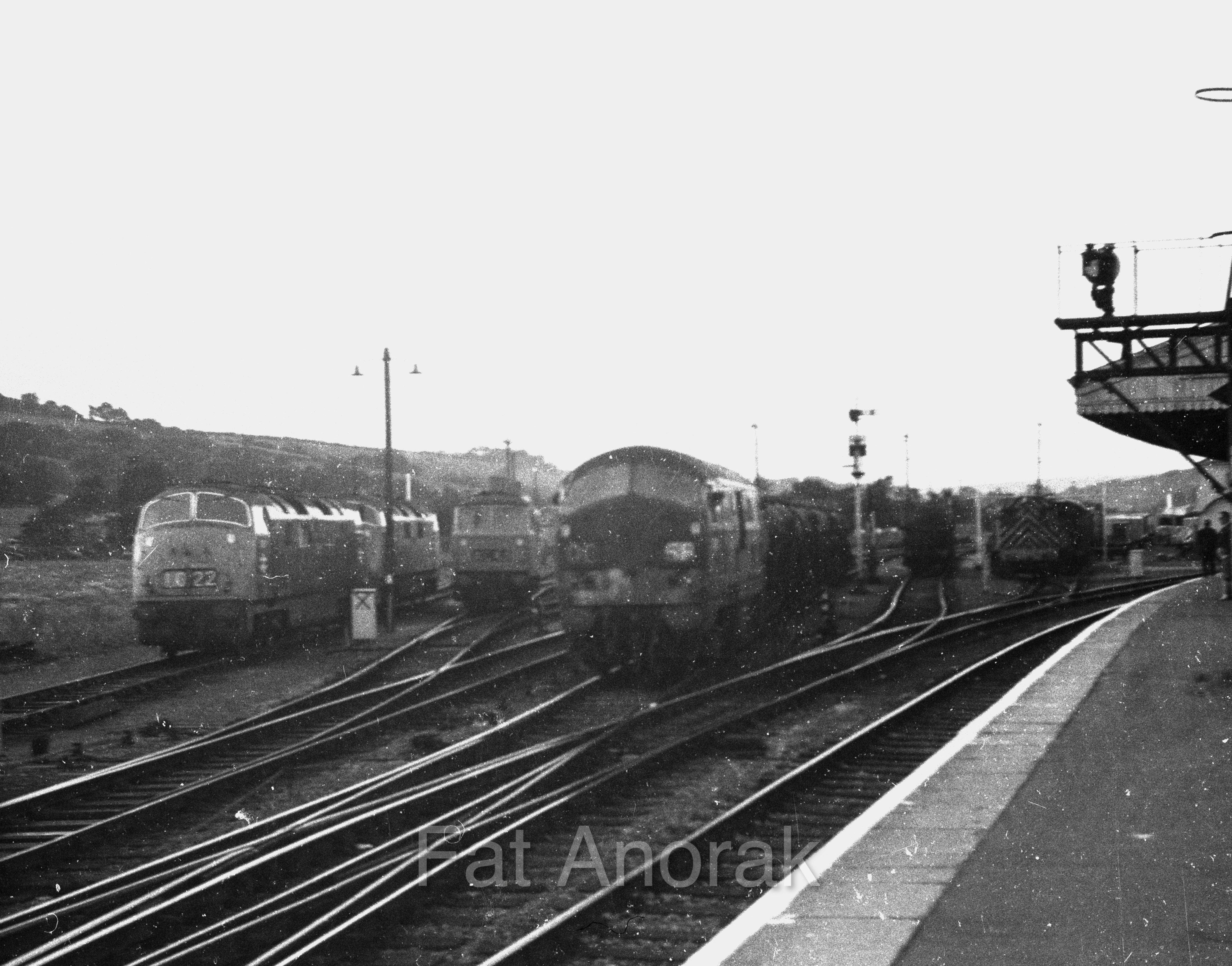 26th August was the final day of my ticket, and so Bristol it had to be. With hindsight, I probably should have taken the advice of a fellow spotter on Temple Meads station and made a quick trip to Severn Tunnel Junction; but that would have cost more money and I would not have had much time there. Anyhow, it was a sunny, warm day and the comings and goings at Bath Road were decent entertainment for me. 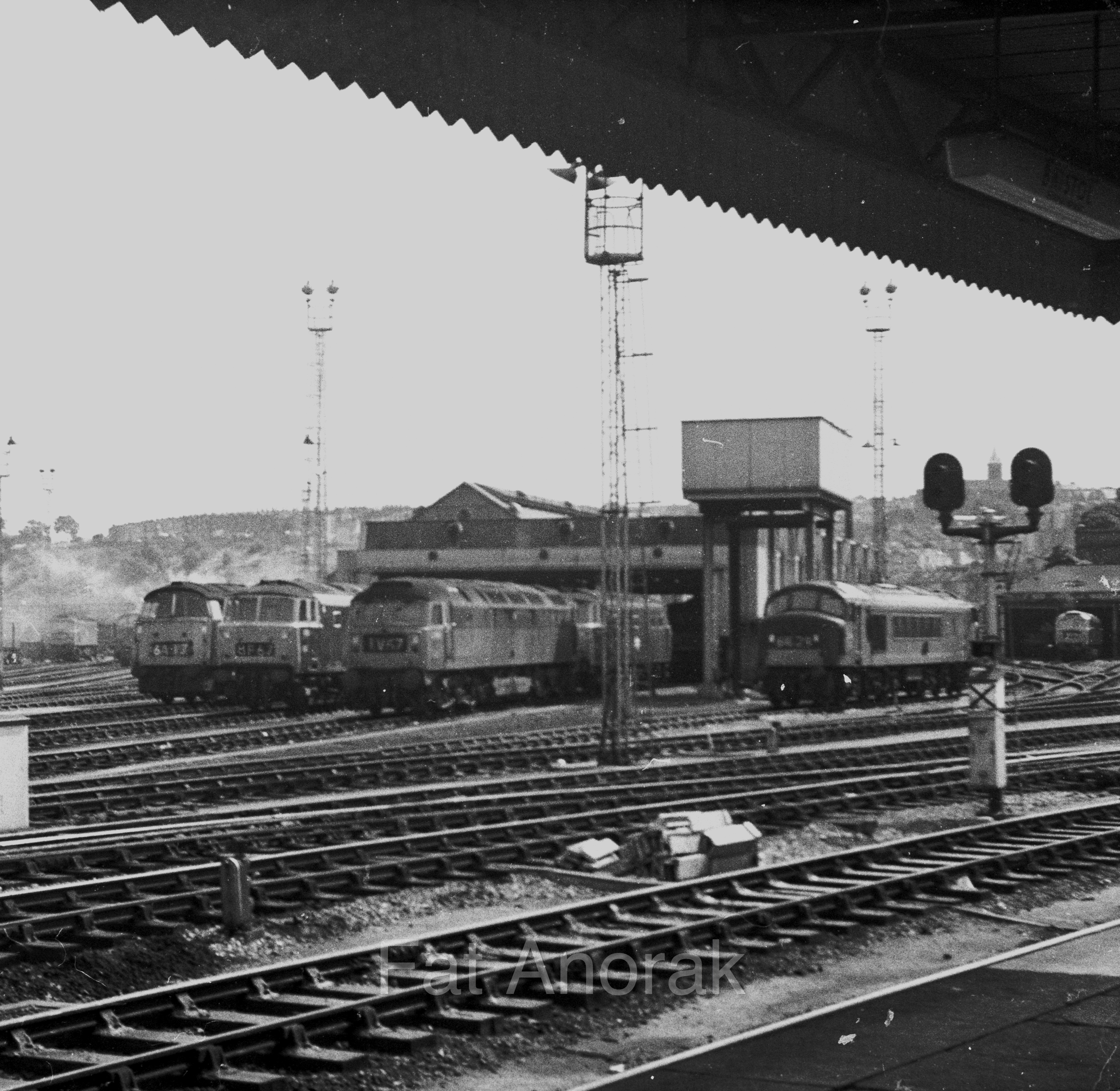 The family were in for a surprise later in week, because one evening my Dad found a lawnmower at the holiday bungalow and cut the grass. When the owner came round to check all was ok, she was very impressed and because she had no booking the following week she invited us to stay over the Bank Holiday weekend at no extra cost. (That year was unusual in that August Bank Holiday Monday was actually 1st September).

This meant that I could possibly sample a Bank Holiday Saturday at Exeter, if I could rustle up the 8/- return fare; which I did.

My last hydraulic hurrah. While on the station that day, another spotter was showing everyone an article which stated BR had earmarked all hydraulics for early withdrawal. That was the final straw for me. I had not recovered from the sheer wasteful slaughter of thousands of steam locos. Now barely 12 months later the innovative WR diesels which replaced them were going to the scrapheap as well. At the end of August 1969, I gave up trainspotting in disgust.